Jeremy Harmer talked about a chain story in his webinar "Does correction actually work? It depends on who you ask". So I though hmmm let's try this in my class some day. That day came, yesterday.
My learners: three girls upper intermediate level sitting for language certificate exams at the end of May.They are teenagers and quite weak. They are very eager to learn and are quite studious. They have classes three to four times a week and the classes are mostly exam oriented.
It was 8.30 pm, so they were quite tired. We were going to do a reading task about animal rights but my learners were just not into it!  We had been talking about animal rights and I had written on the board a couple of words they were having trouble with.
animal rights activists            animal testing         cosmetic companies
disease           claim            develop         support        reliable way        ban
I elicited their understanding of the words and then saw boredom in their eyes. They must have been thinking " She will make us write sentences again!" But nope! I didn't. Instead I thought "ok, how am I going to practise some of the words and wake them up again?" and then I sinned......I did something I should not have. I did not follow my holy grail, my lesson plan!
I used one of the error correction tasks Jeremy Harmer had mentioned in his webinar. I wrote on a piece of paper the phrase  "Once upon a time a beautiful princess met a frog" (well, I had to include an animal!).
I explained the procedure.Student B had to read what the person before her had written (student A) and continue the story based on what she read. Student B then had to fold up student A's text and show the next student (student C) only what she had written. An added challenge was that I told them to use some of the words from the board (the ones in bold) in the princess story.
My students started reading and writing and then folding the piece of paper. They were laughing and smiling while doing so. What I noticed was that they did not ask me for any help with words but they actually asked eachother, quietly. They wanted to keep the story a secret and this raised anticipation in the class.
After about ten minutes of writing a story about a princess and a frog that had animal rights, it was time to read the story and I did. It generated a lot of laughter but also contained many erros which my students actually noticed. This is what I will be doing in today's class. I will copy the story and make notes on some of the mistakes by using an error correction chart. I am very curious to see what will happen so part B of this activity will be described later on today.
PART 2
So, the girls came to class again and we continued from where we left in the last session. The girls actually wanted to write another chain story (woohooo they liked the chain story activity!) but I told them that we were going to correct the Princess story and that is what we did. I started by presenting the Error Correction Code
WW=wrong word
G=Grammar    WF=wrong form/T-tense
Sp=spelling
^ missing word
? I do not understand 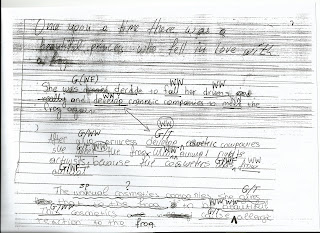 I handed out a photocopied version of the story with the errors highlighted via my sacred code. The girls started reading and correcting what they could, there were giggles and from time to time I stepped in and offered help when. It was more like a classroom feedback error correction session than an individual activity After giving them about 8 minutes to check the chain story, I wrote the story on the board and the students gave me the correct answers. There were occassions where they were not sure what to write so I guided them. A couple of times I gave them the correct answer as for example, the meaning of the word found or the simple past founded. They also did not realise that they had to form the passive voice in one of the sentences so we went over the whole sentence together.The whole activity lasted for about 20 minutes.
My students' opinion of the activity
They did not make any negative comments which made me feel content although truth be told, students sometimes do not want to offend or hurt the feelings of their teachers so maybe that is what they wanted to avoid. I want to believe though that the fact they they wanted to do this again is a good sign!

What do I think? These are some of my first thoughts........
PART 3 A few days later.....
My friend suggested I do a post-lesson, lesson plan. How would I have included this task in my lesson?Why? So I guess away with the postits on my coursebooks (my usual scribble on papers aka Jo's lesson plans) and let's do some serious lesson planning. Ok, not serious, semi serious... ok brief lesson planning. So, I gave it a bit of thought and come up with a couple of ideas (nothing formal here though. You will not see a delta style lesson plan).
Aim of lesson: This lesson aims to revisit the conventions regarding narrating a story. Focus will be on the written form of the story.
Stage 1
My learners listen to someone telling a story and there are some gap filling activitites where my sts would have to fill in questions like:
1. What tenses are mostly used?(provide example)
2..Who are the characters?When did this happen? Why? Where? (questions that would set the scence)
3. Fill in the missing word (the purpose here would be for my sts to notice that story telling becomes better when you can visualise it hence the use of adverbs adjectives)
Stage 2:
I would give my learners a transcipt of what they listened to and let them go over the answers in pairs. I would show the key to my gap filling activity on an overhead projector if available or through another medium.
I would also invite sts to make any other comments on what makes a good story and hold a brainstorming-classroom discussion.
Stage 3:
Some follow up activities on the elements discussed in stage 2 so as to revisit pre existing knowledge, remind them of things they already know. Build on and enhance any previous knowledge.
Stage 4:
The chain story task. This would be a semi controlled task as the first sentence will have been given by me.
Stage 5:
The error correction of the chain story task. I think Deirdre's idea would also be interesting (see comments) to check if the sts could identify the mistakes for themselves.
Any other ideas :) ?

So, this is the first activity I have tried out and semi-reflected on. I will be trying out something new next week but I would really appreciate any comments you have to make on more ways this could have been a better lesson.
Link to Harmer's webinar
http://www.pearsonelt.com/pearsonelt/professionaldevelopment/theharmerlectures/index.page
Alternative chain story activity http://darkwing.uoregon.edu/~leslieob/chains.html
http://lessonplanspage.com/lachainwritingidea412-htm/
Αναρτήθηκε από Unknown στις 2:54 AM

A bit about this blog

In this blog I have the opportunity to ramble as much as I want to about what I love, teaching. I focus mostly on:
Teaching EAP
Teaching Business English
Teaching English to young learners

I hope you enjoy my posts here : )
I have another blog as well. You can find it here:
www.myeltlessonplans.blogspot.gr
In this blog you will find ideas for lessons accompanied by lesson plans, PPTs and handouts.
If you wish to follow me on twitter: @joannacre
Thanks for reading : )
JoannaI have another blog as well. www.myeltlessonplans.blogspot.gr
There you will find lesson plans. Have a look when you hav